There’s a beautiful marriage happening with Greg Abate’s “Magic Dance: The Music of Kenny Barron." It’s the union between Abate’s multi-instrumental gift of bebop and Kenny Barron’s varied and sublime compositions. Abate and Barron, who, in addition to lending Abate his material, handles keys on this recording session, are soul mates occupying the same lovely musical space.

With Barron’s material and Abate’s fresh vision, the two-disc set, recorded over three days at Rudy Van Gelder Studio in New Jersey, is a revelation. Says Abate: “Kenny was kind enough to provide me with music for a range of his tunes, some more well-known than others. The only difficult part was choosing which ones to record.” 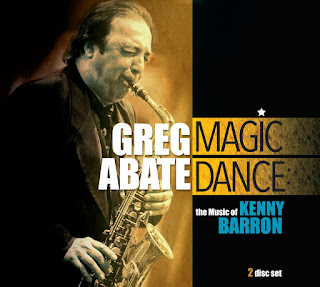 Abate researched and reworked Barron’s music, inserting his own ideas when appropriate, enhancing his arrangements with multiple sax overdubs, and, when the original was so good, it made sense to leave well enough alone. The project was challenging, multi-dimensional, and immensely gratifying. “I even scored a big band sax section (two altos, two tenors and bari) on ‘Innocence’ and ‘Voyage.’ The other 12 tracks have either one horn, or two horns in harmony.”

Each song received concentrated effort to mix and match saxes and flute, instilling a personal touch without losing the theme of the song. Says Abate: “Besides writing and varying intros and solo chord progressions, I tinkered with key changes, endings and tempos, all with the aim of making something happen. You may hear the head changes differing from the solo chords on many of these tunes. The hard part was to come up with the horn sound that fits each tune best.”

In addition to the mesmerizing material, the room also cast a spell on the band. “The studio was amazing. It oozes history,” says Abate. “Working with Maureen and Don Sickler was a humbling experience. What an honor.” Collaborating with the players on the session must have also been humbling. The lineup, which included Barron, alongside the hot-shot rhythm section of bass player Dezron Douglas and drummer Johnathan Blake, knows this material better than anyone. Together they fully support Abate’s innovations, elevating these arrangements as if they were new to the repertoire. “It was a welcome challenge to construct and execute the arrangements and harmonies, overdubbing and soloing! And the band only made it more welcoming.”

The overdubbing, mixing, and mastering were done by John Mailloux at Bongo Beach, in Westport, MA. Says Abate, “John made me comfortable during what were otherwise very tense times, and he enabled me to realize my musical ideas and get them to sound great.”

Songs like “Rain” and “Innocence” and “Voyage” and—frankly, many many more—are all worth hearing. The set is brisk, passionate and lovely. You can let it wash over you like an ocean breeze, or you can dig into it like a treasure chest, and search for gems. The material, the vision, the ensemble, and the sublime recording here reaffirms the health of real bebop, a genre in which Abate has been, throughout his five-decade career, a dependable flame keeper. With this collaboration, Barron and Abate prove that the glory of straight-ahead jazz can still be purposeful, exhilarating, and, like all great marriages, faithful and true.

Chick Corea, Jazz Pianist Who Expanded the Possibilities of the Genre, Dead at 79 #jazz

Keyboardist helped Miles Davis usher in the fusion revolution and founded his own revolutionary groups, including Return to Forever
Chick Corea, the virtuosic keyboardist who broadened the scope of jazz during a career spanning more than five decades, died on Tuesday from a rare form of cancer. A post on his Facebook page confirmed the news. Corea was 79.
Read the entire obituary at RollingStone by clicking here
Best selling smooth jazz at amazon.com