The world music-jazz band’s debut album that emerged from the coronavirus shutdown and racial tension continues the multicultural group’s mission to unite.

Chris Nettuno has enjoyed success building a lot of things, but the community that the serial entrepreneur built by forming a multicultural band, Canelita Sabrosa, during 2020’s COVID-19 quarantine and civil unrest is the most enjoyable success he’s had during his decades-long career. A conga player, Nettuno kept an Atlanta-based collective of multiple Grammy winners and first-call musicians working – and receiving a paycheck - during the shutdown through a series of porch concerts. Two years later, Canelita Sabrosa’s recently released self-titled debut album is receiving airplay in multiple radio formats, garnering nearly 32,000 monthly listens on Spotify, and generating unanimously favorable record reviews. 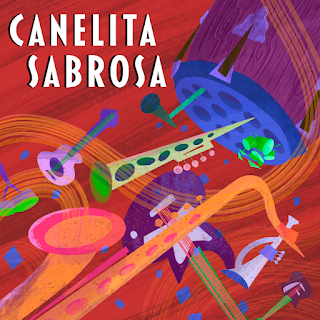 Those outdoor concerts brought together a community of working musicians as well as people tired of being cooped up at home and starving for live entertainment. The group’s name, Canelita Sabrosa, tasty cinnamon in Spanish, reflects their diverse ethnic mix. They are a brotherhood of Black, brown, red and white-skinned musicians harmoniously playing together, united by beats, rhythms and melodies.

Anchored by irresistible Latin rhythms that blend salsa, samba and bossa nova, Canelita Sabrosa plays an amalgam of funk and fusion, rock god guitar, improvisational jazz, and melodic pop. Much of the music on “Canelita Sabrosa” was part of those unifying jam sessions, including five originals written by several of the eight band members along with an eclectic selection of multigenerational remakes by The Beatles (“Come Together”), Bill Withers (“Use Me”), The Cure (“Lovesong”) and Camila Cabello (“Señorita” and “Havana”).

Tracks from the album are receiving airplay at world music and jazz radio stations as Canelita Sabrosa’s Spotify listeners continue to multiply exponentially since the album dropped. While busy playing concerts in the Atlanta area, the band is plotting to return to the studio to start work on their sophomore outing.

One hundred percent, Canelita Sabrosa is a passion project – for Nettuno and for the full-time professional musicians in the band. The infectious joy of the spirited players comes through on the debut album to dance to, to party to, and, yes, to bring people together.

Below is a sampling of the album reviews:

“This exuberantly charged and vibrantly spirited new album opens on the free flowing majesties within the shimmering cover of Camila Cabello’s ‘Señorita’ and the sultry, sensually-imbibed Latin jazz guitar groove of ‘Te Espere’ before they bring forth the rhythmical sashays and shimmies of ‘Si Se Puede,’ the atmospheric ‘Morning,’ the captivatingly exotic ‘Breath of Rio,’ the intricate guitar work of Cabello’s mesmerizing ‘Havana,’ and then come both the anthemic ‘Vamos’ and the newly-veined hipsway of Bill Withers’ ‘Use Me.’” – Exclusive Magazine

“Here you’ll hear Santana-flavoured guitar, soulful sax solos, classic Latin Tito Puente vibes alongside hints of Ruben Blades and the more contemporary flavours of Camila Cabello…a varied, vibrant Latin fest that offers a measure of optimism after what we’ve all been through.” – Soul and Jazz and Funk