Saxophonist Kim Waters has made a career of writing timeless anthems with insatiable grooves, undeniable hooks and memorable melodies that combine the best of jazz, R&B, funk and soul. This formula has catapulted him to the top of the charts time and time again and prompted JazzTimes Magazine to declare, “Waters is simply one of the planet’s best saxophonists.” Instantly recognizable for his keen melodic sensibilities and soulful approach to his saxophone, The Washington Post has likened Waters to “A romantic pied piper out on a long evening stroll.” The prolific saxophonist, composer and producer has enjoyed a career longevity that is rare. Waters’ Zen-like approach to his life and artistry is simple. “My motto is to try and live in a way where I am not stressing about anything. What's going to be is going to be. I strive to be happy because life is short.” It is with this pointed and in the moment approach that Waters’ delivers his most enjoyable solo effort yet, Rhythm and Romance. The album is dedicated to his inspirations - Kayla and Kimberly. “My daughters are my everything,” beams Waters. “They are smart, talented and focused. I am proud that they see me as a role model.” Rhythm and Romance showcases Waters’ compositional prowess and features seven dynamic originals and three re-workings of hits by Janet Jackson, Sam Smith and DeBarge.

Through the years Kim Waters has proven he knows a thing or two about romance. Just take a look at the titles of his hit Shanachie albums over the last decade and half and you can see that love is a reoccurring theme: Love’s Melody (1998), One Special Moment (1999), From The Heart (2001), Someone To Love You (2002), In the Name of Love (2004), All For Love (2005), You Are My Lady (2007), I Want You: Love in the Spirit of Marvin (2008), Love Stories (2010) and This Heart of Mine (2011). Kim Waters’ 22nd recording as a leader and twelfth CD for Shanachie, Rhythm and Romance, finds the saxophonist doing what he does best -- creating dreamy melodies, crafting funky dance-inspired originals, immortalizing sultry ballads, and putting his own indelible imprint on timeless R&B hits. The charming and spiritually grounded saxophonist has proven through the years to be a master composer. “I usually start at the piano and write the song and melody and then I go in the studio and bring the song to life,” he shares. “Sometimes it all comes together immediately while other times it slowly evolves.”
In typical fashion, Waters is like a one-man band playing virtually all the instruments on Rhythm and Romance. However, he does get a little help from some friends including guitarist Dave Manley. Waters shares, “Dave is a great guitarist who can play any style. He has toured with Jill Scott and a host of other great artists and he brings the flavor every time I call him.” Waters is also joined by his long-time friend and collaborator, Chris “Big Dog” Davis (Kim Burrell, George Clinton, Maysa). “He is a super talented keyboard player and a master producer,” exclaims Waters. “Everything he touches turns to gold. He is truly a superstar.” Rhythm and Romance also unites Waters with up and coming vocalist Christi Jones who Waters says we will definitely be hearing more from in the future.
Rhythm and Romance opens with the jubilant, inviting and swinging ditty “Bring It” and that Waters does, as he serves up a soulful dose of his sweet alto, impeccable phrasing and a swooning dance groove. The Janet Jackson hit “No Sleeep,” penned by Jimmy Jam and Terry Lewis follows. Waters superbly conjures up Janet’s sensual soft cooing vocals on his sultry saxophone as he winds his way through this winning slow jam. The track features the keyboards of Chris “Big Dog” Davis and vocals from Christi Jones. The album’s first single and title track beckons you to get on the dance floor as Waters lets loose and proves why he is the master of the groove. The longing and devotional “Forever Yours” is a beautiful R&B ballad, while “Morning Star” is a free flowing number that builds in intensity and mood and displays the beautiful nuances of Waters’ soulful alto.
A special moment on Rhythm and Romance is Kim Waters’ stunning and emotive reinvention of DeBarge’s 1983 hit “Time Will Reveal,” which landed at #1 on the Billboard charts. Waters confesses, “I am a huge DeBarge fan! This is one of my favorite songs. The melody is perfect for a saxophone.” Vocalist James Robinson joins Waters on the song and together they create one of the album’s most beautiful moments. Waters puts a little blues and funk in the mix with “Smoothness” and the dramatic “Can’t Let You Go” delivers another high point on Rhythm and Romance.” “Heaven’s Gate,” is a percussive and ethereal number featuring Waters’ sublime soprano. Rhythm and Romance triumphantly closes with Sam Smith’s smash hit and soul ballad “I’m Not the Only One,” which Waters says he selected for its ‘simplicity but yet soulful feel.’
Originally from Maryland, in recent years Kim Waters has resided on the West Coast but is about to make a return to the East Coast and will relocate to Atlanta, Georgia, where he is part owner of the Kim Waters Jazztones Café. The venue features live jazz Thursday through Sundays. The Renaissance man was inspired early on in his career by such jazz luminaries as Duke Ellington, Herbie Hancock, George Duke, George Benson, Grover Washington Jr., and Cannonball Adderley. Waters was born into a musical family and picked up his first instrument, the violin, at the age of eight. "That didn't go over well with the fellas," says Waters, who later found his calling on the alto and soprano saxophones at 13. Shortly afterwards he began playing in a band with his brothers, James (who he still performs with) and Eric, and his old friend, pianist Cyrus Chestnut. Over the years, Kim Waters has been called on to perform with or open shows for the best including Al Green, Isaac Hayes, Phyllis Hyman, Teddy Riley and Guy, and Gerald Albright to name a few.
Never one to rest on his laurels, the evolution of Kim Waters’ artistry continues to flourish on Rhythm and Romance. “When my fans hear the new music, I hope they have a musical journey that brings them joy and happiness and leaves them wanting to play it over and over again.”
Best selling smooth jazz at amazon.com

Culbertson readying to take “Funk!” to the stage - #jazz 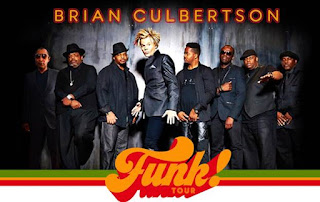 The dozen songs that experimental jazz trumpeter-rapper Matt Von Roderick released sans fanfare as “Hero’s Journey” in mid-December on Bandcamp (https://mattvonroderick.bandcamp.com) are about a protagonist in pursuit of burning dreams of love, acceptance, desire, fun, fame and fortune. Now it’s time for the fanfare. For two nights only, Von Roderick will bring his heroic tales to life in an elaborately-staged concert production at The Sayers Club in Hollywood, Calif. on consecutive Thursdays – March 10 and 17. The 90-minute performance, a sensual feast of music, sound, light and dance conceived by Von Roderick and Creating Arts Studios, will run through the entire album that is available now from Invention Records at major digital retail outlets (iTunes, Amazon, etc.) and will be available exclusively at the venue on CD the night of the shows. Tickets are on sale now from http://www.cacstudios.com/hero.

The last time Von Roderick mounted an extravagant production in Los Angeles, The Huffington Post proclaimed “Matt Von Roderick makes jazz dangerous again.” The dates at The Sayers Club are a bit of a coming out party after a cross-country move from his longtime home in New York City and reinventing his sound and himself – including a name change (his earlier critically-hailed collection was issued under Matt Shulman, his birth name). Tucked away in the studio, Von Roderick spent years crafting his new style. Throughout the process, he’d emerge sporadically to release videos for new songs that are included on “Hero’s Journey” with the resultant clips spreading virally to generate over 4.5 million YouTube views. To support the album release, he recently shot a new clip for the daring instrumental exploration “Coexistence” (http://bit.ly/1PBuinx).

Presented on “Hero’s Journey” as sonic collages constructed of expansive jazz forays, electronic hip hop and clubby dance beats, grinding alternative rock grooves and vibrant pop harmonies, Von Roderick spits playful raps and biting rhymes and croons yearningly on “Hero’s Journey.” His lyricism are quests for intoxicating love, spiritual understanding, overcoming life’s challenges and other affirming mantras laced with the occasional sting of disappointment, despair and disillusionment. In concert, the record will be vividly recreated from top to bottom by Von Roderick’s trio, which includes a keyboardist/piano player and DJ accompanied by tantalizing dancers. The set list will be completed by a couple of reimagined classics from jazz icons Duke Ellington and Louis Armstrong.

Regarded as a trumpet prodigy once named Jazz Artist of the Year at the Independent Music Awards and described by DownBeat as “Taking jazz into the future,” Von Roderick has shared his talent on stage or on record with an eclectic array of artists that includes Neil Diamond, Music Soulchild, Brad Mehldau, Dionne Warwick, Tenacious D, John Medeski, Nnenna Freelon and the Saturday Night Live Band as well as in prestigious locales such as Carnegie Hall, Lincoln Center and the Kennedy Center for the Performing Arts. But that was then and this is now. Von Roderick plans to take the “Hero’s Journey” show on the road (cities and dates will be announced). On record and in concert, “Hero’s Journey” is an empowering experience and a revolutionary exhibition of jazz to behold.